Over the last decade, female athletes from the U.S. have made a huge impact and won millions of fans around the world. More people are involved and interested in women’s sports than ever before. And, of course, some of the most accomplished athletes are sorority women!

A sorority provides great structure and support for pursuing your dreams – even when you are working hard to push yourself further than anyone has before. Many sorority women have become true athletic pioneers who pushed the envelope in sports, inspiring others to do the same.

Let’s meet a few of the most successful sorority athletes in recent memory:

Kerri Strug began training as a gymnast at the age of eight and was part of the U.S. National Gymnastics Team by the time she was 14. As the youngest member of the team, she won a bronze medal at the 1991 Barcelona Olympics. She fought through many professional and personal challenges in the years that followed, including serious injuries. With grit and determination, she went on to win the gold alongside her teammates the “Magnificent Seven” in the 1996 Atlanta Olympics. 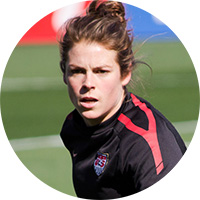 Kelley O’Hara is one of the best-known women’s soccer stars today. As a student at Stanford and a member of Kappa Kappa Gamma sorority, she won the 2009 Hermann Trophy, the top college soccer award in the United States. Early in her career, she earned a record as the #3 top scorer in the U.S. under-20 team. She competed in two FIFA World Cups, in 2011 and 2015. A gold medalist, she plays as midfielder and wingback on the U.S. Women’s National Soccer Team. 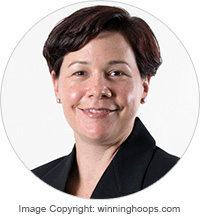 Danielle M. Donehew serves as the executive director of the Women’s Basketball Coaches Association (WBCA) and is only the third person to hold that title since 1981. She sits on the board of several nonprofits, including both sports-related and general community organizations, and is one of the most influential women in college basketball. Managing a $2.5 million budget, she heads the WBCA’s daily operations, marketing, and outreach programs. 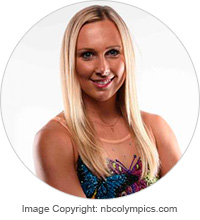 Born in 1990, Mariya Koroleva immigrated from Russia to Concord, California with her parents as a young girl. She quickly found her niche in youth synchronized swimming. She made strong showings in the college championships of 2009, and snagged two second place finishes in 2010. At the 2011 Pan American Games, she and partner Mary Killman won silver medals. During the 2012 London Olympic Games, she and Killman were the only U.S. women to compete in synchronized swimming, as the U.S. had not qualified for the team event.